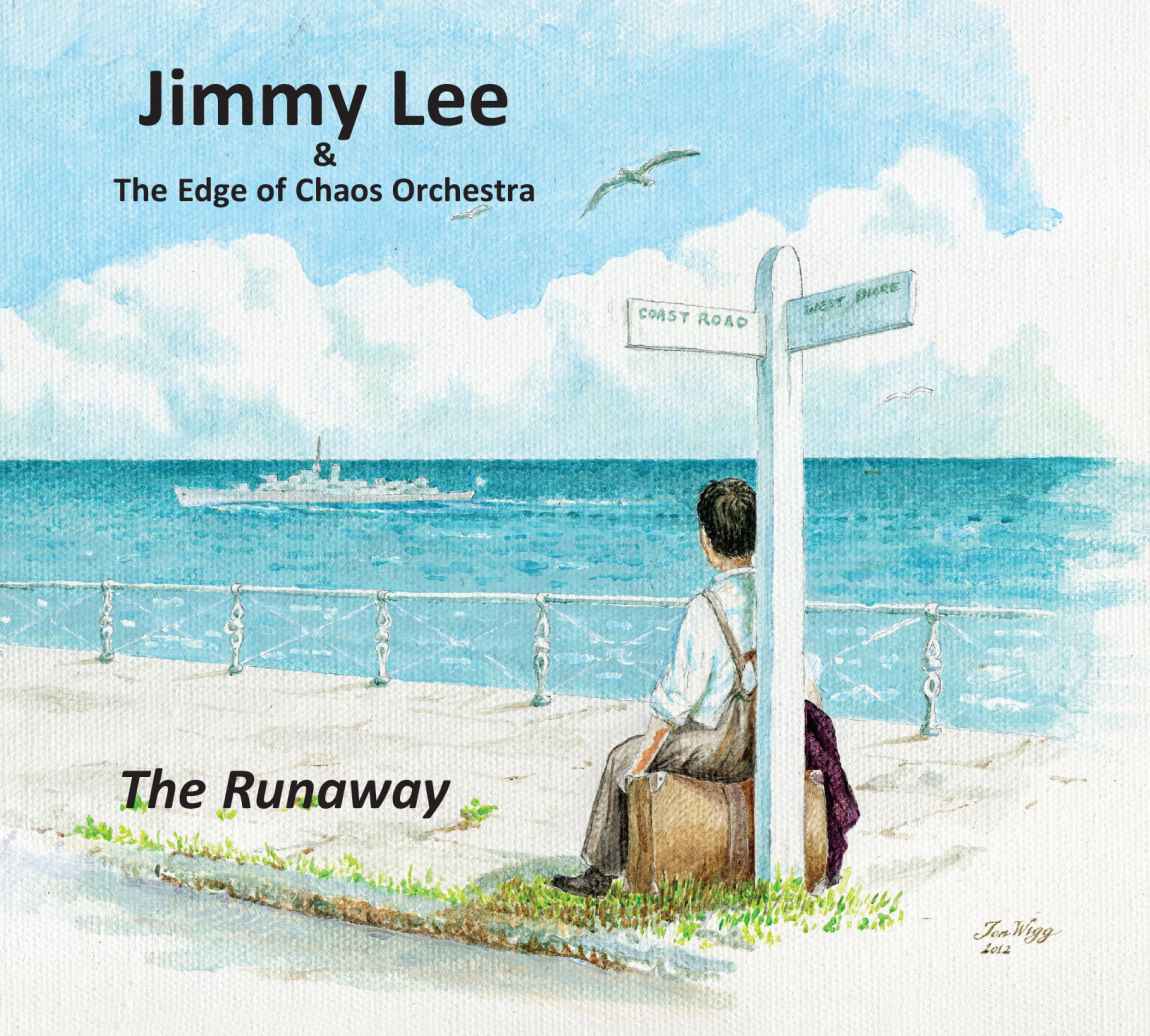 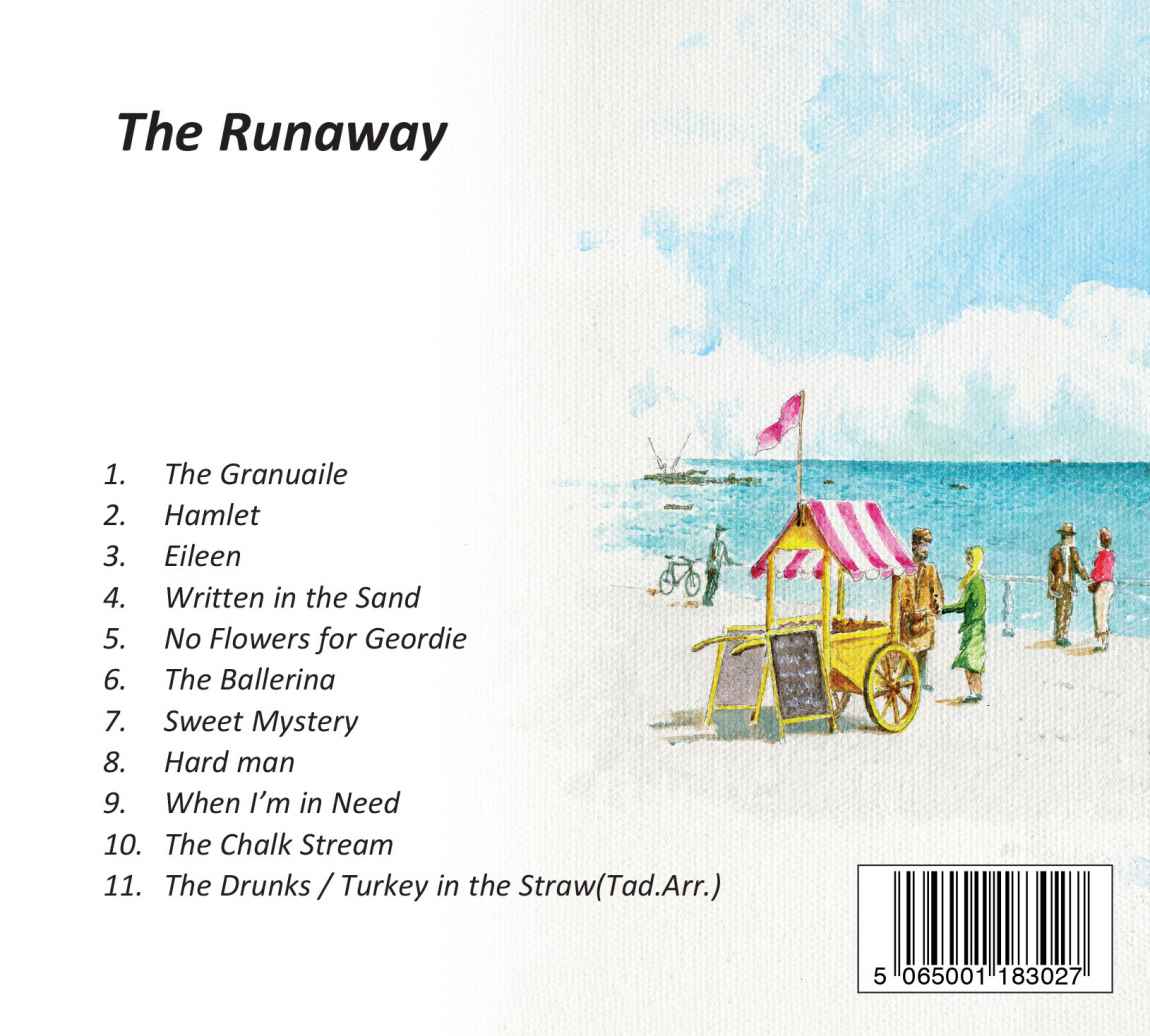 Jimmy Lee’s songs and life story come together in a show, with Jimmy, his guitar, wonderful songs and narrative linked to projected images that give you a personal insight into one of the most incredible life stories you are ever likely to hear....’There are great stories told in lyrics woven in beautiful melodies.

CD Catalogue No JL03 — All compositions, music and lyrics, written and produced by Jimmy Lee

I was drinking, with a Twangman in a bar down by the Old Burgh Quay
The banjo man played Peggy Gordon the night before we put sea

In the darkened dockyard, someone called me I swear I heard a 'banshee' wail
But young and bold my life before me I stepped aboard the Granuaile

Hang on tight boys, I'm on the tiller, I know your frozen to the bone
Jump my boys next time she rises the Granuaile will take you home

Lost and frightened, I pressed onwards into the night, into the gale
On the lost horizon my prayers were answered I saw the lights of the Granuale

Out of work in Dublin but still in possession of my Able Seaman’s ticket I signed on as crew on the Granuaile moored on the river Liffey by O’Connell Bridge. She was part of the fleet that served the light houses around the Irish coast taking provisions and relief lighthouse keepers to there various stations. I had served in the Royal Navy for almost 7 years and considered myself to be an excellent ‘ small boatman’ but had never experienced such ‘stomach churning’ fear when working the Tuscar and Black Rock light houses. I completed several trips on the Granuaile, the Atlanta and the Isolda until I sought the safety of dry land. My admiration for those who served on those ships, and still do, knows no bounds. By the way, the ‘Banjo Man’ was Luke Kelly of The Dubliner’s !

Fragile 'did' for Hamlet
How fragile you and me
Everything is fragile
Beware fragility!

How beautiful was Hamlet
That humble....Bumble.... Bee

WHEN WE GOT CLARECASTLE OUR JOURNEY WAS OVER
SHE SMILED AND SAID THANK YOU, I SAID NOT AT ALL
THEN FROM UNDER HER EYELIDS SHE VENTURED TO ASK ME
WOULD I TAKE HER THAT NIGHT TO LAHINCH TO A BALL

JUST FOR A MOMENT I STOOD THERE IN SILENCE
HOW COULD I SAY NO TO THIS LOVELY COLLEEN
I'D BE PROUD TO GO WITH YOU I VENTURED TO ANSWER
PLEASE TELL ME YOU'RE NAME, SURE MY NAME IS EILEEN

LONG YEARS HAVE PASSED SINCE I HAD TO LEAVE IRELAND
AND THAT BEAUTIFUL GIRL WHO BY CHANCE RODE WITH ME
I'LL NEVER FORGET HER NOR THE WAY THAT I MET HER
THAT GIRL FROM CLARECASTLE THE 'ROSE OF TRALEE '.

Driving out of Limerick on my way to County Clare a beautiful young girl was hitching a lift, so, naturally, being a gentleman, I stopped. We chatted and ‘small talked’ along the way. At the end of the journey she asked if I would take her to a dance in Lahinch that evening. She was somewhat embarrassed to ask but her escort had let her down at the last minute. Naturally, being a gentleman, I agreed. I did not know at that time that this was a Ball to select the Rose of Tralee to represent County Clare…. I’m delighted to say that Eileen won that honour and went on to represent Ireland and then on to the World Finals…. and won!
A fairy tale story, tiaras and glory,
She reigned for one year did this young beauty Queen.
I’ll never forget her nor the way that I met her
That girl from Clare Castle the lovely Eileen

YOU DON'T SUPPOSE A CLIMBING ROSE COMMITS TO MEMORY
THE THORN, THE BLOSSOM, HOLDING ON, WELL IT'S THE SAME FOR YOU AND ME
AND YOU MAY NOT HEAR THE MUSIC PLAYED NOR SEE THE MARCHING BAND
BUT YOU WILL COME TO KNOW, FOR SURE, WHATS BEEN WRITTEN IN THE SAND

SO WITH EACH EVENTUALITY, AS YOUR FOOTSTEPS RISE AND FALL
THERE'S A FAIR DEGREE OF CERTAINTY, YOU'VE ONLY ANSWERED TO A CALL
AND WHEN THE DAY OF JUDGMENT COMES AND YOU'R CALLED TO TAKE THE STAND
YOU CAN SWEAR ON THE HOLY BIBLE THAT, IT WAS WRITTEN IN THE SAND

SO WHEN NOTHING STANDS BEFORE YOU NOW AND NOTHING'S WHAT IT SEEMS
DON'T DISPAIR THERE'S SOMONE THERE SO HOLD ON TO YOUR DREAMS
LET THE DOVE OF PEACE THAT'S IN YOUR HEART, SMITE THE SWORD IN YOUR RIGHT HAND
AND USE YOUR WILL TO LOVE NOT KILL WHATS BEEN WRITTEN IN THE SAND

Sometimes songs come from nowhere…… or do they sometimes come with age! ?... I love the meaningful lyrics and the melody…and we all have to fight the good fight !.....the whole song was written in just a few minutes….

No Flowers for Geordie

NO FLOWERS FOR GEORDIE, HE'S NOT HERE TODAY
THE SEA HAS CLAIMED MY GEORDIE BOY
PLEASE NO FLOWERS TODAY

FIFTEEN YEARS OF LEARNING, HE'LL NOT GO DOWN THE MINE
SO WE TOOK HIM NEAR TO IPSWICH TOWN
FAR FROM THE SEAMS OF THE TYNE

THE 'BULLY BOYS' CAME NIGHTLY, DID THINGS A BOY COUNDN'T TELL
BUT THEY MADE HIM WRITE IN HIS LETTERS HOME
MAMMA YOU'R BOY'S DOIN WELL

IT'S WRITTEN ON HIS PAPERS, TWAS NOT THE DEED OF A MAN
BUT A WAVE THAT TOOK MY GEORDIE BOY
FIVE MILES OFF PLYMOUTH SOUND

No Flowers for Geordie

Like lots of other boys I ran away from home when I was 14 yrs old and joined the Royal Navy as a Boy Seaman 2nd class. I was sent to the training Ship HMS Ganges a cruel harsh 12 months lay ahead of me and thousands of other boy’s. One lad, a Geordie, was drafted early to a Destroyer bound for the Mediterraniann sailed from Plymouth… He was washed overboard on his first few hours at sea……..His parents never knew of the misery he suffered at Ganges. I wrote this song a long time ago.

If you have ever had a musical box you will remember how it wound itself down and never ever finished where you wanted it too! So you wound it up again and again. Then wound it in the opposite direction to make it play fast! Then you over wound it and it broke! Then opened it up to mend it and broke it some more! The figure that revolved as it used to play was often a ballerina……. and she got broke too!

YOU'R MY RIPPLE ON THE WATER, YOU'R MY RAGING WATERFALL
YOU'R MY EVERLASTING KISS GOODNIGHT, YOUR MY EARLY MORNING CALL
YOU'R A BIRDSONG FLOATING FROM A TREE, A MOON BEAM HAVING FUN
YOU'R THE FREEZING GRIP OF WINTER, THE GENTLE BURNING OF THE SUN

YOU'R THE WEEPING OF THE WILLOW, YOU'RE THE CAUSE OF ALL MY WOUNDS
YOU'RE MY ENDLESS STREAM OF LAUGHTER, YOU BRING COLOUR TO MY TUNES
SOME DAYS WE WALK TOGETHER, SOME DAYS WE WALK ALONE
SOMEDAYS SHINE LIKE DIAMONDS, WHILE OTHERS TURN TO STONE

Life and love is still a mystery !

MY HEART WOULD SKIP AND MISS A BEAT AS I HEARD MY HERO'S FOOTSEPS MEET
THE GRAVEL ON THE PATHWAY TO OUR DOOR
HEARD THE SOUND OF A SCRAPING CHAIR AS MOTHER ROSE TO MEET HIM THERE
GIVING TO HER MAN THE THINGS HE NEEDED
HIS FOOTSTEPS HEAVY ON THE STAIRS, HAVE YOU BEEN GOOD AND SAID YOU'R PRAYERS
AND GOD FORBID IF HIS ORDERS WERE NOT HEEDED
NO KINDLY WORDS, NO KISS GOODNIGHT, CLOSE THE DOOR, TURN OUT THE LIGHT
IN OUR SILENCE WE COULD HEAR EACH OTHER BREATHING

WE ALL WORKED HARD TO EARN OUR KEEP, ATE IN SILENCE, DO NOT SPEAK
GOLDEN RULES THAT NEVER COULD BE BROKEN
NO WARMTH, NO SMILE, NO FOND EMBRACE, BEWARE THE HAND ACROSS THE FACE
IN THE SILENCE YOU COULD HEAR YOUR OWN HEART BEATING
LATE AT NIGHT HAVING SAID OUR PRAYERS WE'D SIT ON THE TOP THREE WOODEN STAIRS
AND LISTEN TO THE OLD MAN PLAY ACCORDION

I GREW UP FAST, LEAN AND STRONG AND HONEST KNOWING RIGHT FROM WRONG
BUT BY THIS TIME I HAD STOPPED BELIEVING
NO COMFORT HERE, NO LIFE AT ALL, I SAW THE WRITING ON THE WALL
AND COUNTED DOWN THE DAYS WHEN I WAS LEAVING
I HUGGED MY MUM, KISSED HER FACE, THREW A SHIRT AND TIE IN AN OLD SUITCASE
WAY OUT THERE ANOTHER WORLD WAS CALLING
YOU CAN CALL ME BACK IT'S NOT TOO LATE, NO WORDS CAME SO I CLOSED THE GATE
AS MAMA'S TEARS LIKE AUTUMN LEAVES WERE FALLING

refrain WHEN MAMMA WROTE MY HEART WOULD BURN, MISSED MY HOME BUT NOT RETURN
SENT BACK MY LOVE AND PRAYED FOR THERE SAFEKEEPING
I LIVED MY LIFE WITH THE MARK OF CAIN AND WE HARDLY EVER SPOKE AGAIN
AND SAD TO SAY HIS HARDNESS LAY WITHIN ME
WHEN HIS TIME CAME TO TURN TO DUST, I JOURNEYED HOME AS EACH CHILD MUST
GATHERED ROUND HIS GRAVE SOMONE WAS SPEAKING
SOMETHINGS ANGRY, SOMETHINGS SAD, SOMETHINGS GOOD, SOMETHINGS BAD,
SHEDDING TEARS THE YEARS HAD BEEN KEEPING

I HAD NEVER BEEN IN HIS ROOM BEFORE, I TURNED ON THE LIGHT AND LOCKED THE DOOR
HOPING THAT SOMEHOW I MIGHT BE NEAR HIM
IN A CARDBOARD BOX TIED UP WITH STRING WERE SOME PHOTOGRAPHS THAT I'D NEVER SEEN
PRESSED FLOWERS IN LOVE LETTERS HE'D BEEN KEEPNG
WARTIME MEDALS IN A ROWE WERE THERE COMPLETE WITH RIBBONS AND A LOCK OF HAIR
CHRISTMAS CARDS, KISSES LOVE AND GREETINGS
THEN I READ HIS LETTERS TO HIS MUM AND DAD FROM A FRIGHTENED LONELY SOLDIER LAD
FROM A RED CROSS BED WRITTEN WHILE HIS WOUNDS WERE HEALING
MATHEW FIVE VERSE TWENTY ONE 'THOU SHALL NOT KILL' HIS LINES BEGUN, WORDS HE TOOK FROM A BOOK HE WAS READING
I COULD ALMOST HEAR MY DADDIES SCREAMS, SACRIFICED FOR SOMEONES DREAMS
YOU CAN'T ALWAYS MEND WHAT YOU HAVE BROKEN
I FELT MY KNEES SINK TO THE FLOOR I'D LOST MY DAD IN THAT 'KN WAR
HIS STORY TOLD NOT A SINGLE WORD WAS SPOKEN
I HOPE HE KNOWS THAT WHEN I LOOKED INSIDE I FOUND A GENTLEMAN WITH A GENTLE SIDE
AND SUDDENLY I FELT VERY NEAR HIM

This is a song about and tribute to my Father. The hardest song I have ever written and sometimes too difficult to perform. Thousands upon Thousands of men returned from the war emotionally broken with no help at all. It is now known as Post Traumatic Stress and the damage took its toll on many a family. I know I am not alone when I sing the song. It strikes a chord with many people who have ‘been there’………words say it all!

Take my hand, come and grace the table
In case you call I always lay for two
Turning down the bed my hands were shaking
At the thought that I might once more cradle you

That time has come again my heart is breaking
Yes, I hope I’ve brought you comfort too
You’ll come to me again of that I’m certain
You always seem to know when I’m in need of you

I’m not sure where this song came from but it is very personal and pleasing although sometimes difficult to sing. Imagination is sometimes more powerful than reality and sometimes reality is too painful to bare. Comfort comes to us in its own time and in its own way.

I want those who lived within me
And those who